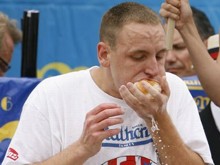 Joey Chestnut - San Jose, Ca.
2008 Nathan's Hot Dog Eating CHAMPION!
Joey has been a professional eater since 2005. In the 2007 Nathan's Hot Dog Eating Contest he set an astonishing new world record of 66 hot dogs and buns in 12 minutes! In this year's contest he won again by eating 59 dogs in 10 minutes only to tie Kobayashi. Joey won the competition by eating 5 more dogs in the sudden death "Dog Off". Joey celebrated his victory by then eating Kobayashi!

Joey has won the Chinook Winds rib-eating championship three times, dominated nearly every chicken wing competition he's attempted, and most recently did the unthinkable by eating 103 Krystal hamburgers in only 8 minutes!
Joey is truly a meat eater to look up to!

Click below to see some more of Joey's stats!