Pot pies used to be a staple food for college kids and single adults. They're delicious and inexpensive, but cheap foods aren't usually convenient. Pies take what seems like an eternity to bake in an oven. Eating a couple of these little treasures is a significant undertaking... or at least it was. With the dawn of special microwave trays and pouches, pot pies have become much like any other pre-prepared meals and can be cooked rapidly. Fast cooking means more costly, but you can get around that with a little creativity.

Traditionally, oven baked pot pies made by companies like Banquet have been less than a buck, but they come in a foil pan that can't be cooked in a microwave. If you want a crispy pie, you need to shell out two and a half times as much for something like a Marie Callender. You get a microwavable tray and a microwavable pouch and a crispy delicious treat. Great, unless you're still a poor college kid.

So are there options? Are they delicious? Yes and no. Banquet, Swanson and other companies now make "microwavable" pies that come in a special tray but with no top. The instructions all state that you need to put several slits in the pie, then cook in the tray for five minutes and then let the pie stand in the microwave for three to five minute. That's great, except that every single time I have followed these instructions the pie is overcooked on the outer edges and pretty much raw in the middle. The middle of the crust is soggy. Really soggy.

After much experimentation in a real life kitchen with an everyday microwave, I have come up with a sure fire method of cooking the college-kid-friendly-pie-for-a-buck. Yes, your results may vary if you have a million watt microwave or the opposite, a 400 watt hand-crank model. Otherwise you should be good. Use your brain. You know if you have an out of control cooking device. 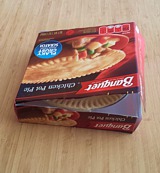 Step One:
Buy a cheap microwavable pot pie. I'm partial to Banquet's "Sausage &Gravy Deep Dish." Keep it frozen until you are ready to eat it.

Step Two:
Open one side of the box.

Step Three:
Cut the two sides of the box adjacent to the side you just opened along the top folds creating a lid.

Step Five:
Leave the pie in the unopened microwave for four more minutes. This is important. Don't ask why, just accept this as part of microwave science.