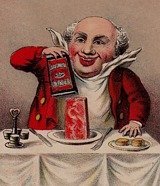 Long before they got their pie ingredients from a Libby's can, Americans got their daily meat from it. Most people who are familiar with the name "Libby's" are thinking of canned pumpkin and other fruits and vegetables. Perhaps you remember the television ads with children singing "Libby's Libby's Libby's on the label label label." The name is synonymous with juice, but it wasn't always that way.

Libby's started out as Libby, McNeill & Libby in Chicago, Illinois, presumably in the 1870s. Founders Archibald McNeill and the brothers Arthur and Charles Libby actually sold canned meat. Specifically, the company sold beef in brine, or corned beef. In 1875, the cannery launched a unique trapezoid shaped can that put them on the map.1 During this time Libby, McNeill & Libby used print and premium marketing heavily, even going so far as to offer William Shakespeare plays in trading card format to help move the then popular canned ox tongue. 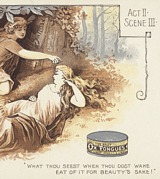 In the early twentieth century, Libby's began selling fruits and vegetables, and yes, its famous juices. You can still, however, get your hands on an authentic can of Libby, McNeill & Libby Corned Beef (direct from Brazil).