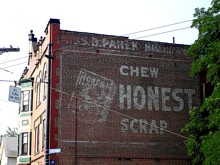 Part One in a Series of Indeterminate Length

One of the best ways to spend a winter evening is eating all the scraps from your summer cook-outs. I know what you're saying – "Scraps? That's crazy talk!" Well, you can't eat everything all the time or you'll explode, and winter's coming sooner or later. So here's a handy guide to make the most out of your uneaten sausages, burgers and steaks.

The first thing to remember when salvaging your leftover carnage is to offer everything else to your guests. In the , it seems to be a standard practice to offer your close friends or family some of the leftovers. Great. You're a good guy. But there goes the remainder of the awesome smoked sausage you just made.

So make sure you always have plenty of containers you're willing to part with. Why? So your guests can take potato and pasta salads with them. Ah ha! Nobody likes to be selfish. Free containers for side dishes equals more meat left for you! You can save things like sour cream, cottage cheese, margarine or Chinese take-out containers. Running low on plastic wrap, zip-lock bags and aluminum foil on purpose never hurts either, especially when trying to deter would-be meat-takers.

Never throw away a scrap of steak or those three uneaten smoked Italian sausages. You're a meat eater. Eventually you'll have enough scraps to make a hell of stew or an awesome roast that's not actually made of a whole roast. Understand? Now you're starting to think like a true carnivore! Hey, if your going to eat another animal's butt, at least be respectful and eat it all.

Step 3: Get a Really Big Pot

If you're going to cook something a second time, you're going to need a big pot. A giant kettle will do, but if you want to be able to walk away you might want to go with something a little safer, like a large crock-pot. A six-quart crock-pot or "slow-cooker" will run you about $25. It's worth it. Hell, buy two for those special occasions. You'll pay for them quickly once winter comes. I personally don't make it that long. There's nothing like a steak and smoked sausage stew on cold October evening.

Never try to cook or stew anything frozen. Crock-pots are great, but if you throw a bunch of frozen meat into one and walk away, even if the pot is set on high it'll be about 14 hours before it warms up, let alone cooks anything. Defrost your meat overnight in your refrigerator. Microwaves are great, but your meat's already been cooked. Adding heat that rapidly is going to cook the outside layers of your scraps again and make them tough. Also, never defrost more meat than you really intend to use, because refreezing usually means loss of food quality.

You CAN, however, refreeze meat under certain circumstances. The Dept. of Agriculture (USDA) states "Meat and poultry defrosted in the refrigerator may be refrozen before or after cooking. If thawed by other methods, cook before refreezing."1 I personally think it's like making a copy of a copy. The more times you freeze something, the more it degrades. So... now you know. Don't email me just to tell me you can refreeze things.

So now you've learned how to collect and reclaim your salvage. This should keep you busy for the rest of the summer. Start cooking.


Watch for Part Two: "I've got a Bucket of Defrosted Meat... Now What?"