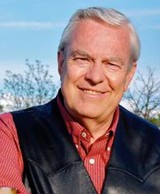 This weeks COTW is Chicago's own Bill Curtis. Not only is Bill a respected television journalist, producer, well-known former CBS News anchor and current host of A&E crime and news documentary shows, but he also LOVES TO EAT MEAT!

Bill has jumped on the grass-fed beef wagon and recently, with the help of other investors, started a cattle ranch called "Tallgrass Beef" that specializes in grass-fed beef. A while back Bill gathered some potential investors at one of Chicago's premier steakhouses, Harry Caray's. He brought out some samples of his beef and the rest is history!

He recently said, "I started Tallgrass Beef to raise cattle the way they were meant to be raised". You got to hand it to him. He loves meat so much, he's raising his own!

Check out more about Tallgrass Beef and why Bill started it here.