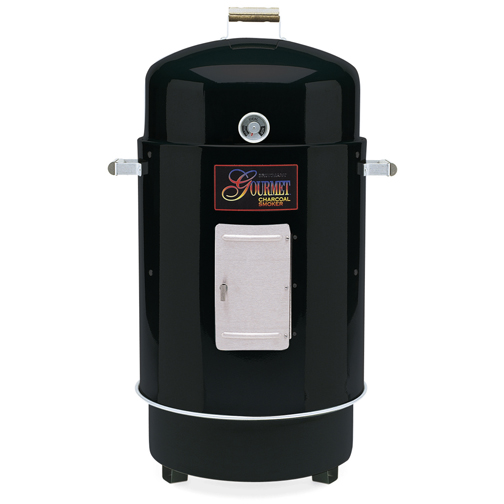 A couple of Sundays ago my brother-in-law Paul and myself were invited over to our brother-in-law Doug's house to watch our beloved Chicago Bears take on his beloved Detroit Lions. Our plan was to help Doug set up his kegerator, break in a smoker that he was given as a gift several years ago, drink beer, watch football and smoke some meat! All was accomplished very well.

Read the rest of the review below.

Doug received a Brinkman Gourmet Charcoal Smoker as an anniversary gift from a former employer, but never had the time to set
it up. He figured it would be a pain to get set up and might not be
worth the effort. Boy was he wrong! The Brinkman was super easy to put
together and easy to use. It took only a few minutes to set up and once
the coals were ready to go we were set.

Now, I had mentioned the plan to Sven a few days earlier. When I
mentioned it was a Brinkman, the first thing Sven warned me about was
the lack of holes in the charcoal pan. Sven had owned a Brinkman years
ago and had to "modify" it with a drill to get the necessary airflow to
keep the fire going. So, I went to Doug's with my trusty drill in hand.
But, I never had to use it. The "gourmet" model had plenty of holes and
airflow was not a problem.

The coolest thing about the Brinkman has to be the temperature gauge.
There's no numbers on it! You heard me...no numbers! There are just
three zones: WARM, IDEAL, and HOT. As long as you keep the needle in
the "IDEAL" zone you're golden. I would recommend trying to keep it as
close to the middle as you can.

The only complaint we had was in regards to the side access door. We
had to add a bit more charcoal and wood chunks a couple hours into the
ribs. The door is a little too high. The pan used for liquid hangs down
and slightly blocks your access to the coals. Other than that, the Brinkman was
a joy to use! I would recommend it for the novice or expert smoker alike.

We used oak and hickory to smoke some very tasty ribs, brats, and
Italian sausage. Hell, we even threw some cans of baked beans in a
smoked them too! The food was tatsy, the beer was cold, and my beloved
Bears dominated the Lions all afternoon. It was a good day!

Here are some of the specs: