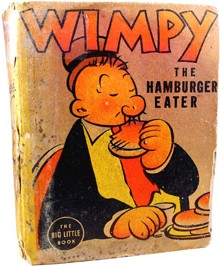 This weeks famous carivore is none other than
J. Wellington Wimpy. Wimpy first appeared in Elzie Crisler Segar's classic Popeye comic strip "Thimble Theater" on May 3, 1931. He was an unnamed referee in one of Popeye's prize fights. Eventually, Wimpy was given a name and became a famous character in his own rite, particularly for his insatiable lust for hamburgers.

Wimpy achieved incredible notoriety in the 1936 Max Fleischer cartoon "Popeye the Sailor Meets Sindbad the Sailor," in which Wimpy spends almost the entire cartoon following a duck with a hand-crank meat-grinder.

"I will gladly pay you Tuesday for a hamburger today."

Other choice lines:
"Let's you and him fight!"
"Come over to my house for a duck dinner. � You bring the duck."